Pandit Deendayal Upadhyaya’s Integral Humanism is a re-interpretation of the essence of ancient Indian thought that is encompassed in the concept of Vasudeva Kutumbam – The world is one family. This concept makes society responsible for the welfare of each other, recognises that each member is an intrinsic part of the whole – and necessary for the survival of all. Deeendayalji called this interdependence – complementarity. The farmer need the tailor to stitch his clothes and the carpenter make his furniture. To survive he needs them. They in turn need him to provide them food. They all need each other to prosper themselves. This was the basis of the Panchayati Raj, where the village was an independent self-reliant unit that looked after its own. It necessarily includes the Antem Viakthi – The last man.

Deendayalji defined his thinking as follows, “There have been a number of schools that have propounded humanism. But their thinking has been rooted in Western philosophies and so it is essentially materialistic. These thinkers have not been able to offer any philosophical explanation for the ethical nature or behavior of man. If you deny spiritualism, then human relations and behaviour and the relationship between man and the Universe cannot be explained.”

In its essence, “Integral Humanism is the name we have given to the sum total of various features of Bharatiya Sanskriti, abiding, dynamic, synthesising and sublime. This is the ideal that determines our direction. But our idealism does not mean any doctrinal obtuseness. An ideal has to be translated into practice. Our program, therefore, has to be grounded in realism. Indeed realism is the forte of our program, the measure of our achievements and the touchstone of our ideal.” 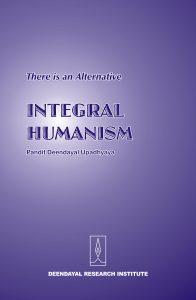 Click here to download the series of 4 speeches given by Pt. Deendayal Upadhyaya in 1968 that he delivered in Mumbai from April 22nd to 25th April 1965 where he outlined this concept.