After streamlining the activities of Gonda, DRI selected another backward district – Beed in Marathwada region of Maharashtra, as its centre of activity in 1987. It started with the restoration of Sondara tank. Beed district is one of the most backward and poor regions of the country having negligible rainfall of about 15-20 cms per annum. Based on a detailed survey of the area, the programmes taken up include conservation of water, de-silting of tanks, digging of new percolation tanks and planting of trees in catchment areas to increase rainfall, etc.

A major achievement has been the programme for de-silting Sondra percolation tank in Domri village of Patoda Talku and developing the surrounding areas with the help and active participation of voluntary work of students in summer season.

Nearly five lakh cubic meters of silt was removed and transported to the farms around making them more fertile. This was rightly called as Dhanyata Abhiyan, by Shri Nanaji, and it is a three-pronged programme involving the youth, Government and philanthropists. All this was achieved by conducting a 30-day “Shram Sadhana Shivir”. The presence of Shri Nanaji throughout the camp braving the scorching sun at his 70th year was a rare opportunity and a source of inspiration to the 360 youth that stayed throughout the camp and to the many more hundreds that participated in the Abhiyan under his direction. It was indeed “Dhanyata Abhiyan”, for, the experiences of the youth and their cherished memories remain in their lives leading to a chain of such other useful programmes leaving behind a renovated water tank as perennial source of water for the generations to come. It is a blessed act to the participants and to the beneficiaries as well. 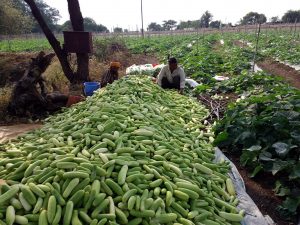 Krishi Vigyan Kendra (KVK), Ambejogai, Beed (Maharashtra) – The Krishi Vigyan Kendra at Ambajogai, in Beed district of Maharashtra was started in year 1992. This center is helping farmers to increase both farm and non-farm income by providing them on-farm and farmers’ field trainings in various discipline. For more, visit: http://www.drikvkbeed.org/